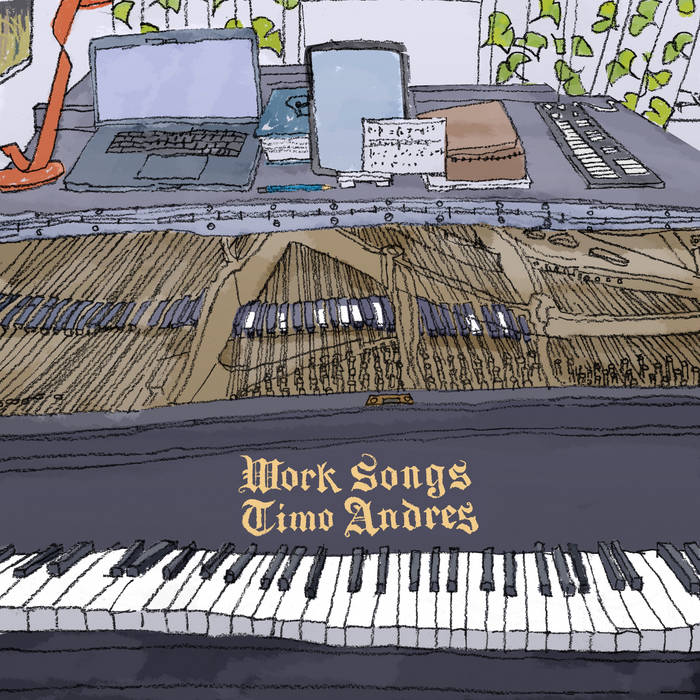 Work Songs is the new album from Brooklyn-based composer and performer Timo Andres. The record is available exclusively through New Amsterdam’s Bandcamp subscription as part of the Windmill Series, a digitally-focused set of releases for subscribers in addition to our existing release schedule. Subscribe today to receive the album, which will be released on all other platforms on June 21st 2019.

Work Songs is a collection of songs for voices, guitars, accordion, piano and keyboard. The piece, which premiered on the Ecstatic Music Festival in 2014, features a number his collaborators from the New York new-music scene. Andres explores artists' working habits through texts ranging from Melville to Woody Guthrie, and draws musical inspiration from a wide swath of American song traditions.

Program note about the music, from composer Timo Andres:

“Artists’ working habits have always fascinated me—Matisse sculpting in bed, Charles Ives’s Bach-ian eye-openers, Alice Munro’s strict quotas (very useful)—not so much for the insight they provide into the actual work, but more as an idealized template for how to organize one’s life.

The Work Songs project began to form eight years ago, in the spring of 2011. I had wanted to make something having to do with American song traditions. One of the first musical “scores” I encountered in my childhood was the Fireside Book of Folk Songs (a 1940’s edition, I think, with beautiful spot-color illustrations) which my parents owned. There are many work songs in the Fireside anthology, mostly about different kinds of manual labor. I gradually formed the idea to write a kind of artist-centric set of work songs, using similarly straight-backed, aphoristic texts. Some are songs of hardship and complaint, while others are meant to provide comfort, empathy, or possible solutions to problems. But they all, in some way, attempt to address existential questions—what do “artists” do, exactly, and how should we exist in the world?

Unlike a typical commission, Work Songs is a piece I wanted to write, for a specific group of friends and collaborators: Becca Stevens, Gabriel Kahane, Ted Hearne, and Nathan Koci. Becca, Gabriel, and Ted sing, as well as help play whatever instruments are at hand—a hodgepodge of guitars and keyboards—with Nathan and me on accordion and piano. The indispensable guitarist Taylor Levine joined the band further down the line. Since I wrote Work Songs for specific people, I was able to tailor each song to their particular individual strengths. The piece feels like a team effort in this regard, which is appropriate, since these fellow artists not only inspire me with their work, but help me find answers to those existential questions.

By way of introduction, “Art”: Melville lists the contradictions inherent in its creation (always comforting to think, when frustration arises, that Herman Melville felt it too). “Unemployment” describes a musician so burnt-out—artistically, emotionally, financially—that he is unable to hear to the music anymore. “To Whom it May Concern” gives playful voice to a familiar feeling: that the grass is greener on the other side of the Atlantic (ah, for that progressive, democratic-socialist, Scandinavian grass). “Poet’s Work” is about whittling something down to its essence—a poem pared down to an aphorism, set over a slowly contracting musical process. And finally, Woody Guthrie’s list of new year’s resolutions— “Rulin’s”, he calls them—are as good and simple advice as anything I’ve read. Write a song a day. Learn people better. Change bedclothes often.”

All compositions by Timo Andres

a composer and pianist living in New York City.

Bandcamp Daily  your guide to the world of Bandcamp

outré black metal, with a Victory Over the Sun interview and music from Liturgy and Jute Gyte.